In a recent thread I saw on /r/marketing, the question was asked, "What is something no one in marketing will admit, but is definitely true?"

While some of the answers in the thread were obviously snarky or pessimistic, there were also several answers that held a lot of truth, so I wanted to share those here.

One of the pioneers of marketing, merchant John Wanamaker (1838-1922), famously said:

“Half the money I spend on advertising is wasted; the trouble is I don't know which half”

The quest to determine which marketing efforts are making the biggest impact is supremely complicated because the nature of the results themselves are ephemeral and not always prone to accurate measurement.

The demand for tangible answers, while perfectly reasonable, has resulted in a couple of specific outcomes that actually affect marketing efforts negatively:

The more you come to understand the big picture of how marketing works as a whole, the more you accept that some things are just hard to measure, but that doesn't mean they don't need to be done.

"There is never enough money to do the right thing, but always enough to do a &#!%&$ job at the last minute." (source)

Businesses always struggle to balance short-term and long-term thinking. And as much as the long-term thinkers wish companies would just always choose the long-term solutions, the frustrating truth is that the realities of cash flow and corporate decision-making require that short-term decisions sometimes have be made.

The trick is just to make sure you're not making them all the time. If you have to do something in the short-term to live to fight another day, then do it. But if you're doing those things all the time, every day, you're probably working at a dysfunctional company.

"The people that rise the quickest in marketing tend to be good BSers but terrible marketers. I've worked with countless CMO's that were complete dolts and only succeeded because of many talented people below them." (source)

This is pretty true for every industry, unfortunately. See also: politics.

The problem with selecting an expert to lead a department is that the people doing the selecting are almost never experts themselves, so they have no idea whether the new executive is actually qualified or not. They just interview a bunch of different people and pick the one that "feels" right or "seems" qualified.

That being the case, smooth talkers can have a significant advantage when it comes to being selected for top positions.

Your best bet is really to try to find a company that values actual expertise, proven results, and demonstrable experience. And if you happen to be that CMO, you have a responsibility to get good and live up to the promises you've made, because everyone under you is depending on you not to screw it up.

"Branding & awareness campaigns are massively powerful, but digital marketers find it hard to admit since the usefulness is not attributed or tracked as easily as most paid channels are." (source)

Can you imagine if Nike decided that it would only invest in easily-measurable marketing efforts, and had totally skipped the legendary, iconic messaging and creative that made it the industry juggernaut it is today?

That's what's happening inside marketing departments all around the world right now. They're skipping branding and awareness campaigns in favor of PPC and other simpler efforts because they're easier to think about and look great in spreadsheets.

"Word of mouth is the single best marketing strategy but no one wants to focus on that because it’s hard and doesn’t make great money (from an agency standpoint)." (source)

If clients understood how much of the expert advice they receive from agencies is based primarily around what kinds of campaigns make the most and easiest money for those agencies, they'd be shocked (and would probably take a lot more of their work in house).

"In terms of digital advertising, nobody has any idea what they are doing and coast along with no consequences because no one else know either." (source)

I've never outsourced digital work because I've never found any outside agency or freelancer that I could actually trust with it. I've been either disappointed or outright betrayed every time I've attempted it.

The primary issue here is that the economics of outsourcing don't support campaign effectiveness. If someone can slap together a PPC campaign in 15 minutes and call it a day while the client's money rolls in, why would they ever bother spending hours digging through the numbers to figure out how to tweak and optimize it.

And if you can just whip up a quick report that cherry-picks numbers to make the campaign look like it's performing to a client who doesn't understand the difference, why would you spend all the time required to educate them about the nuances of what's happening (and why sometimes seemingly negative results may be exactly what you need in a particular situation)?

It's tempting to make the digital marketing brain-hurt go away but delegating it to a smooth-talking digital agency, but more often than not they just view that campaign as a money farm that survives with just a few applications of fertilizer now and then.

It feels terrible to admit this, but it's true. Sometimes you just land a magical opportunity that grows into other things.

Don't tell anyone about that, though.

"There is no such thing as a 'drop-dead date' or an 'emergency.' Whenever marketing wants or needs to push any date out they obviously can because it was arbitrary to begin with." (Source)

I have the privilege of having some friends who are doctors and nurses, and it's great for giving me some perspective on my own career. They have real emergencies. I don't.

This isn't to say that marketers should just sit on their thumbs all day. That's no fun either. We get into this business because we like to make things happen. And the speed and efficiency with which we can execute and adapt can make us tremendous assets to the company we work for.

That said, it's also important not to start feeling like day-to-day marketing work is a life-or-death situation because it's truly, truly not.

I sometimes irritate people because of my belief that if your marketing wins awards, it's probably bad marketing.

When I ran a marketing agency, we had a general policy against ever entering awards competitions because it would skew our decisions in the wrong direction.

People imagine that they want a super cool website with background videos and sexy animations and swooshing transitions and stuff that fades in and out and all that stuff. And I, too, love that stuff. It's super cool and impressive, and I have a lot of respect for the people who figure out the technical details of how to execute on it.

It's like high fashion. It's great that we have fashion experts and Fashion Week and fashion magazines and all that...but that's not what you typically want to wear to a meeting with a customer. If you did, they'd probably feel uncomfortable and suspicious that you're putting so much effort into flashy attire. It would actually distract from the conversation you're trying to have with them.

Anyway, I thought there were some great points there and wanted to share them. It's always a rewarding thing when people admit the hard truths of their industry. 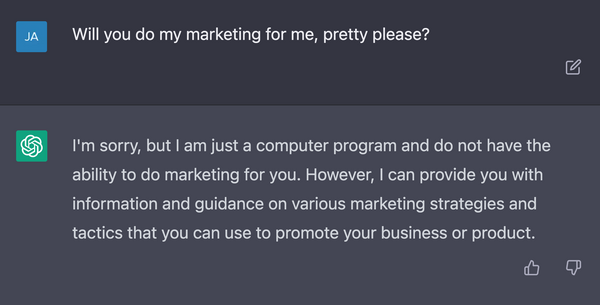 ChatGPT is more than just a tool, it's a game changer. Here's how to use it to revolutionize your content marketing. 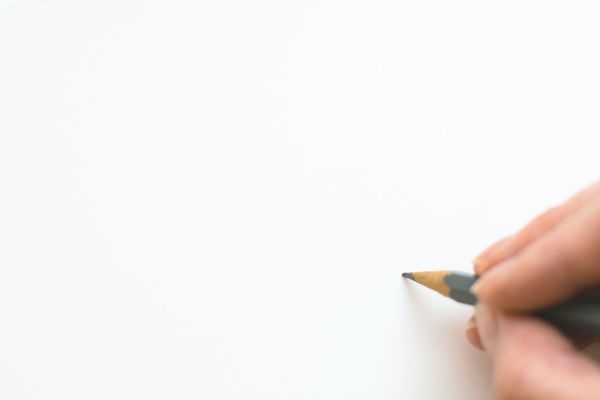 Content marketing is a way of marketing that focuses on creating and sharing valuable content with your audience. The goal is to educate and engage your audience, so they'll want to buy your products or services. It can be used in a number of ways, but for B2B marketing, it's Measuring marketing isn’t easy, and there are plenty of challenges you’ll face when attempting to measure the effectiveness of marketing strategies and tactics. Some of the biggest challenges include: * The difficulty of isolating the impact of marketing efforts: Marketing campaigns often operate alongside other factors that can influence